Defense Modernization Plans through the 2020s: Addressing the Bow Wave

Since the enactment of the Budget Control Act (BCA) of 2011, much attention has been paid to the near-term effects of budgetary constraints on national defense. What has received less attention are the looming budgetary challenges defense faces beyond the BCA budget caps and the Defense Department’s five-year budget planning horizon. Many weapons programs will be at or near their peak years of funding requirements at roughly the same time in the 2020s, creating a modernization bow wave. This report details the plans for major acquisition programs over the next fifteen years and explores the complicating factors that may make the situation more problematic for policymakers. It analyzes a range of options to mitigate the bow wave, including increasing the budget, cutting additional force structure, and making trades among major acquisition programs. The report finds that while none of the choices available are easy, it provides an opportunity for the new administration taking office in 2017 to better align modernization plans with defense strategy.


The Cost of U.S. Nuclear Forces: From BCA to Bow Wave and Beyond

Evan Montgomery and I analyze the cost of U.S. nuclear forces over the coming 25 years.  We quantify the costs of modernizing all three legs of the nuclear triad, consolidating and extending the service lives of nuclear warheads and bombs, upgrading nuclear command and control systems, and operating and sustaining existing nuclear forces and support personnel.  We conclude in this study that even under the BCA budget constraints, the cost of U.S. nuclear forces is not a matter of affordability but of priority.  While the costs will grow substantially over the coming decade, these costs will peak at less than five percent of total defense spending in the late 2020s and gradually decline to roughly the same level as today in the 2030s.

Analysis of the FY 2015 Defense Budget 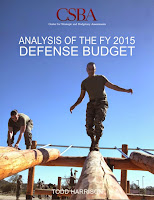 In this report, I looked at trends and future projections for defense spending, from the BCA budget caps to military compensation and acquisition funding.  I found that DoD could need $200-300B more than the BCA budget caps allow over the next five years to fully resource the defense program laid out in the 2014 Quadrennial Defense Review and 2012 Defense Strategic Guidance. 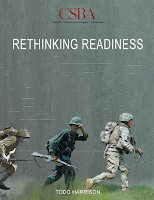 The thesis of this report, published in the Fall 2014 edition of Strategic Studies Quarterly, is we have an even bigger readiness problem than we realize because we don't have good metrics for readiness. For the most part, readiness is measured and reported in inputs, like flying hours and maintenance levels, instead of outputs, like average bomb miss distances. To make matters worse, we don't have a good understanding for the relationship between inputs and outputs so it is hard to show how a cut in readiness funding actually harms readiness.  My conclusion is that DoD and Congress need to revamp the way readiness is measured and reported to focus on readiness outputs (performance measures) rather than inputs. Moreover, DoD needs to use controlled experiments to establish and continually refine the complex relationships between readiness inputs and outputs. Without this, we may be significantly overfunding or underfunding readiness without knowing it.

Chaos and Uncertainty:The FY2014 Defense Budget and Beyond

In this report, I analyzed the FY14 budget and the key issues facing defense, including military compensation, base closures, modernization programs, and war-related funding.  I also examined trends in the defense budget from prior drawdowns and offered a view for how the current drawdown may play out over the coming years.

The Future of MILSATCOM

This report explores the difficult choices facing the United States as it plans the next-generation military satellite communications architecture.  I argue that if the U.S. military is committed to a strategy of assured access in the face of anti-access/area denial (A2/AD) capabilities, as the 2012 Defense Strategic Guidance states, the Department must adapt the MILSATCOM architecture to operate in a more contested environment. However, increasing protected MILSATCOM capacity by starting new programs or continuing to conduct business as usual is unwise given the fiscal constraints the nation faces.

This report, co-authored with John Speed Meyers, assesses U.S. efforts at wartime contracting and reconstruction using four case studies: Iraq’s State-Owned Enterprises, Local-First Programs, the National Solidarity Program and Commander’s Emergency Response Programs.  The study finds that creating the capability to evaluate reconstruction programs in near-real-time and doing so by employing the proper metrics would enhance their effectiveness.  It concludes that if the U.S. military is to continue using money as a weapon system, it must develop a robust method of “battle damage assessment”.

Mark Gunzinger and I wrote this report based on the insights developed through a series of strategic choices exercises we conducted during the summer of 2012. The exercises sought to inform the debate on the way defense resources are allocated in light of declining budgets, the evolving threat environment and the changing DoD’s priorities.

The Effects of Competition on Defense Acquisitions

As defense acquisition costs have soared over the past decade, efforts at reforming the acquisition system have focused intensely on creating more opportunities for competition as a means to reduce costs and incentivize better contractor performance. While competition can, in some cases, reduce costs and improve contractor performance, it is not a cure-all for the problems that plague defense acquisitions. This paper presents a quantitative approach, using game theory to model the effects of competition on contractor pricing. It demonstrates that the way in which a competition is structured can be a determining factor in whether competitive pressure is sufficient to balance the additional development costs of multiple contractors and higher unit costs from splitting the award.


Analysis of the FY 2013 Defense Budget and Sequestration

This report offers a comprehensive account-by-account analysis of sequestration's potential impact on the DoD budget.  It discusses the overall direction of the budget request, its alignment with the new strategic guidance, and the details of how sequestration would be implemented.  It also evaluates the impact sequestration would have on different types of accounts and highlights some of the major budgetary issues facing the Department even if sequestration is avoided.